For several years Alex Leibkind had raised the bar each year as GM of the Rhein Fire taking his team up to audiences of above 50.000 on several game days.

In 2004 he had accepted a high position for his home town which had led him to New York where he had died suddenly in 2006 at the age of only 42.

Before Sammy Schmale had taken over directions as the new GM also hosting and organizing 2 large World Bowl events.

Already since ages Sammy Schmale had been coordinating the hard working backbone of the former GM Alex Leibkind and even the legendary GM of the Kansas City Chiefs Carl D. Peterson had explicitly praised his contributions to the the NFL Europe League.

Even fully under World Bowl pressure he had found time for a long introduction to his team and the League, which had helped many outstanding NFL stars to reach their current status.

In particular the two receivers Marcus Robinson and Bill Schroeder had become a pride of the their wonderful success in the NFL.

Another early top gun at the office had been Dr. Gerald Meier the legendary PR director at Rhein until the NFL Europe head office had gotten hold of him for national operations.

After that the career of the former quarterback had received another push when German Tennis champion Boris Becker had hired him for his organization. 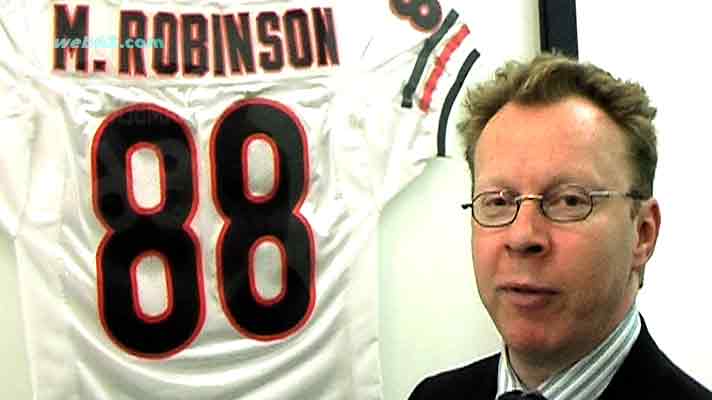 Sammy Schmale had been with the team for many years before he became the last GM of the team.
Video

After Claymores match in 1999
Video

Tom Aust had been the friendly and extremely professional anchor man for all media.