And once again it had been a tight clash in front of 27,439 after only very few matches between the Galaxy and the Fire had seen clear winners.

In recent years both of them had lost their dominance to the Berlin Thunder, where Peter Vaas had started a line of 3 World Bowl wins.

In particular the Rhein Fire had been struggling a lot recently and their fans had been dying to experience a win while the Galaxy had won at least one World Bowl in recent times. 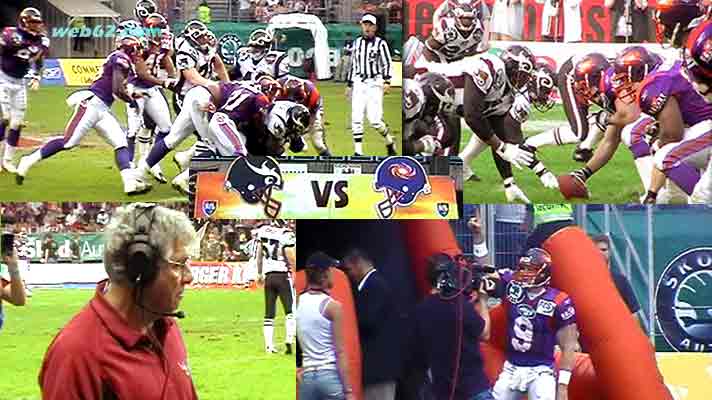 Frankfurt Galaxy QB Kevin Eakin from the New York Jets had completed 16 from 20 passes for an impressive 202 yards and 2 TDs and a solid rating of 121.1. 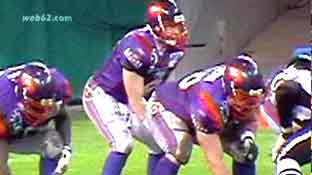 Galaxy qb Kevin Eakin saw some steady competition inside his team against Akili Smith and he completed 10 from 21 passes for 116 yards and 1 TD. With 4 attempts he added 10 rushing yards and the photo shows him before getting intercepted, what had lowered his rating down to 60.8. 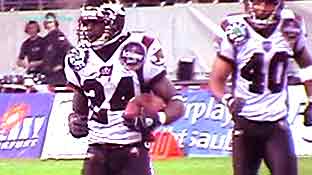 Cornerback Blue Adams had been one of the best at Rhein Fire and being back in the states he had also made it right away into the Buccaneers where he had gained a good share of playing time instantly.

Here he had intercepted Galaxy QB Kevin Eakin for 13 yards. 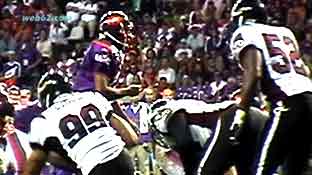 Akili Smith was about to emerge as the best quarterback on the field with a rating of 131.1 for 9 from 11 passes completed for 90 yards and 1 TD. 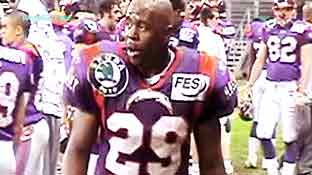 Ahmaad Galloway had been with the Denver Broncos and during the game he was the leading rusher for the Frankfurt Galaxy with 23 carries for 117 yards. In addition he caught 2 passes for 22 yards.