In the end the Fire offense had been too fast and in both games they scored over 30 points.

Craig Nall was not allowed much space during the game. 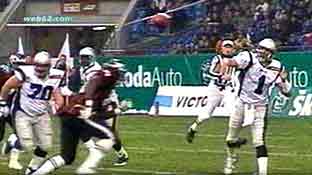 Quarterback Craig Nall was fighting and trying hard, to get his offense going. But only 4 minutes possession time in the first quarter were a sad result for the Hounds of Scotland. 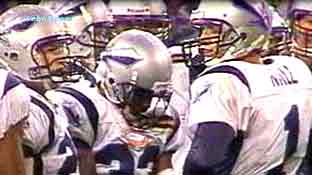 During the fourth quarter the Scottish Claymores offense and Craig Nall were looking better than in the first quarter. 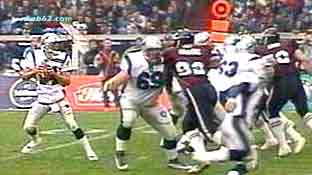 Quarterback Shane Stafford from the Patriots did run for 12 yards besides completing 11 from 18 passes for 96 yards and 1 TD resulting in a fairly low rating of only 54,2, because he got intercepted twice. In fact he never made it into the NFL, but he became a star in the Arena League. 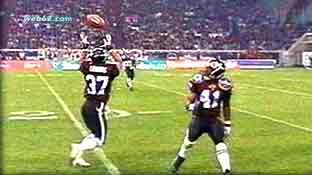 Cornerback Tony Lukins from the Oakland Raiders was able to intercept one of qb Shane Stafford`s passes and to convert it into 13 yards. 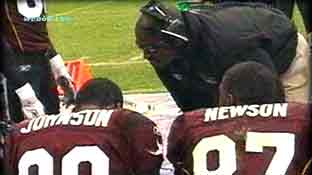 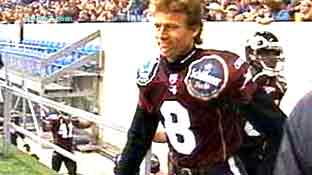 Kicker Ingo Anderbruegge is a local soccer hero for Schalke 04 who was playing in his first NFL Europe season. 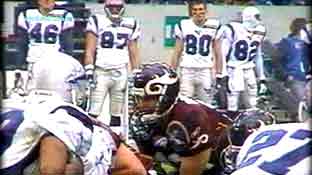 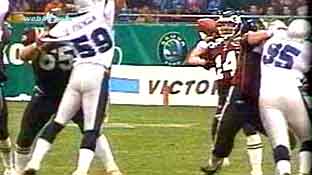 Quarterback Chris Greison completed 6 from 11 passes for 54 yards and 2 TDs combined with 1 interception what had given him a rating of 69,7.

And on the photo he was throwing for a TD scored by WR Charlie Adams. 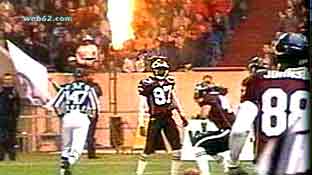 Kendall Newson was expected to become a strong asset for the team and so he did. 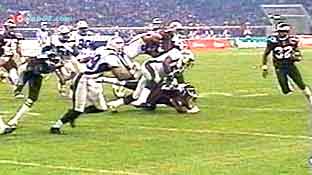 Running back Frank Moreau from the Kansas City Chiefs did impress with 18 carries for 96 yards.