"This Team is truly on a mission."

That was the statement of Galaxy head coach Doug Graber after that triumphant win against their main rival from the Rhein River area with 38-7 in front of 25,539 fans.

Miami Dolphin`s WR Robert Baker had scored the TD of the season , when he simply jumped over Rhein Fire`s safety Abdul Howard from the Jaguars, who did crash into LB Dane Krager from the Seahawks.

During the entire game Robert Baker had contributed a total of 4 receptions for 111 Yards and 2 TDs.

Joy was huge among the players and surely also the Galaxy fans had seemed delighted since they were waiting for a victory against the Fire for some years.

And when the game was started by National hero Ralf Kleinmann, who had been highly motivated.

James Brown had become a solid factor since qb Quinn Gray had received a slap in his face in week 5, when he had not even been welcome on the field for discipline reasons. 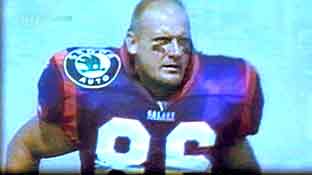 Galaxy's tight end icon Werner Hippler had brought in NFL and XFL experience, which was compiled at the Detroit Lions and at the Las Vegas Outlaws. 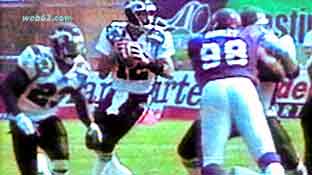 Rhein Fire had started with QB Nick Rolovich from the Broncos, who had earned himself a rating as low as 45,9 with 11 from 19 passes completed for 80 yards and 1 interception. 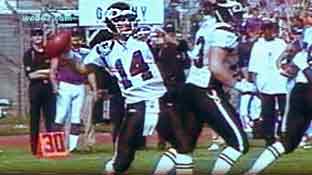 Chris Greison completed 12 from 25 passes for 102 yards and 1 TD and he was intercepted once what earned him a rating of 55,8. But overall he had been one of the weak spots at Fire on that day.