Frankfurt Galaxy was able to defeat the mighty Barcelona Dragons with 38:24 in a hard fought battle.

The Dragons had a line of outstanding NFL players on the field that were led by quarterback Todd Bouman.

Once again the Frankfurt Galaxy had won the World Bowl in an exciting clash with the extremely strong Barcelona Dragons.

Absolutely brilliant had been the Galaxy Rap inside the World Bowl Dance video when even NFL Europe President Oliver Luck had a ball on stage alongside World Bowl MVP MC Andy McCullough. 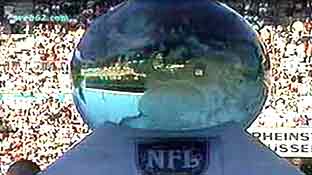 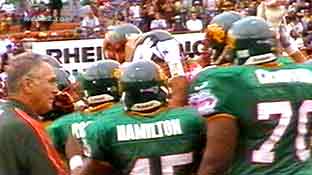 Earlier Barcelona Dragons head coach Jack Bicknell had felt very comfortable in front of 39.643 fans, who were mainly supporting his team against their arch rival from Frankfurt. 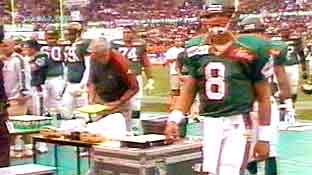 Todd Bouman had completed 16 out of 31 passes for 161 yards and 1 TD and he had been 1 intercepted only once. 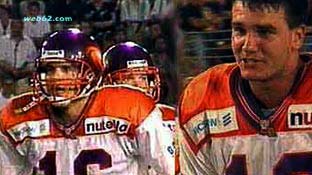 Jake Delhomme had even become a Super Bowl starter for the Carolina Panthers and during World Bowl 99 he could complete 9 from 14 passes for 126 yards and 1 TD without a single interception.