During the regular season Frankfurt Galaxy had reached the World Bowl after having defeated the Rhein Fire twice.

And a third clash was avoided by a missed field goal against the Barcelona Dragons.

In fact, the Barcelona Dragons had dominated the entire season with their extremely strong roster led by Todd Bouman,who was just about to become a strong force in the NFL.

At the same time controversial Lawrence Phillips had been about to become a real scam at the 49ers and to end up even in jail a little bit later.

Instead his NFL Europe colleagues Brandon Noble and Chris Brymer had said, that it was always good fun to be on a team with him.

During his NFL Europe season Lawrence Phillips had rushed for more than 1000 yards in only 10 games.

Also wide receiver Mario Baily had revealed MC talent before the match in which he did convert an 8 yards TD pass from qb Jake Delhomme.

Running back Lawrence Phillips had only been able to contribute some 40 yards until an early injury took him out while scoring his only touchdown in the game. 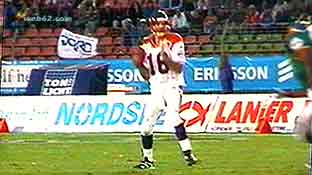 Jake Delhomme had everything under control showing an immaculate performance an in the last quarter he had a lot of time while the Dragons defense seemed to have given up too already. 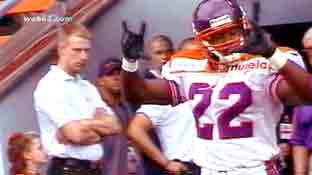 Jermaine Chaney had shown 3 carries for 41 yards, but even as a World Bowl winner he had not been able to catch a spot in the NFL. 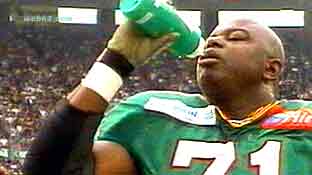 Guard Melvin Tuten had come from the Denver Broncos but he couldn't do much against the speedy Frankfurt Galaxy. 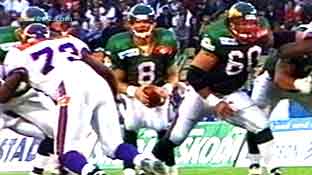 Todd Bouman was probably missing his Lawrence Phillips option while Jake Delhomme had with Andy McCullough and Mario Baily 2 receivers as his well scoring options.

And in 2005 Todd Bouman had lost once again against Jake Delhomme at his first starting appearance for the New Orleans Saints.