After the World Bowl Galen Hall and Jim Criner did resign alongside Dick Curl and Al Luginbill so that four out of six new head coach positions had become vacant.

From all the World Bowl 2000 players Anthony Mitchell, Chris Akins and Aaron Stecker had become Super Bowl Champions while Nick Ferguson had probably the longest career in the NFL.

In fact it was a superb season in which the Rhein Fire had reached their ultimate peak while with Amsterdam and the rising Berlin Thunder under Peter Vaas a new chapter was about to emerge.

Aaron Stecker had required a bit of oxygen at times while & Ontiwaun Carter had rushed for 56 yards.

Much fun before the game had NFL Europe President Bill Peterson when Rhein Fire GM Alex Leibkind had given him some kind of a special therapy for his stressed spine. 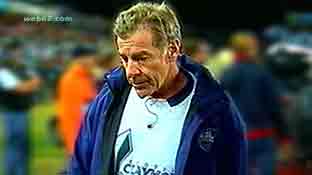 Head coach Jim Criner had looked like reminiscing the good old days at the Claymores while walking to the press conference where he was about to surprise the Scottish Claymores fans with his resignation. Or was he just sad about the loss of his team? Anyway, a year later him and Galen Hall were a part of the XFL. 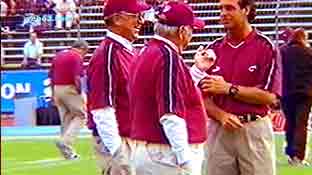 Galen Hall had added Bart Andrus to his coaching team, who was about to take over the Amsterdam Admirals from the third XFL casualty Al Luginbill. 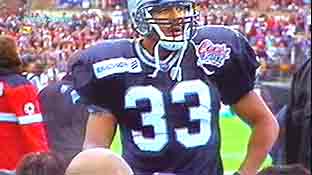 Scottish Claymores running back Ben Snell had contributed six carries for 9 yards gain while the most weight had been on his colleague Aaron Stecker. 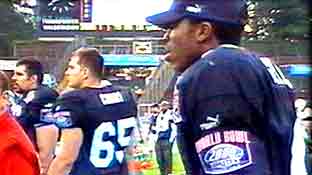 Donald Sellers from the St. Louis Rams was well remembered by his head coach Jim Criner even many years later as one of the best receivers at the Scottish Claymores 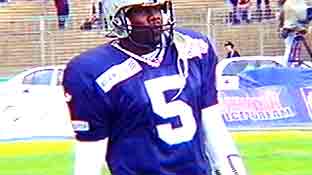 Quarterback Marcus Crandell was vividly demanded by some of the Claymores players and fans, but also during the World Bowl he had remained on the bench. Later on he had moved north to the Edmonton Eskimos.