35,0000 fans had come to the Rhein Fire Arena where the Berlin Thunder was celebrating their stunning 4rth World Bowl berth since 2001 with already three trophies on their shelve while the Amsterdam Admirals and Bart Andrus had finally managed to clinch their very first appearance.

The Amsterdam Admirals had been the more efficient team in World Bowl 2005 as they had for example WR Ruvell Martin and QB Kurt Kittner on the field.

It was the first appearance at a World Bowl for Amsterdam Admirals head coach Bart Andrus while Rick Lantz had won the trophy already in 2004. 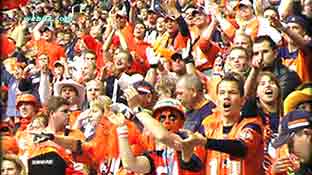 Impressive was the noise that more than 4,000 wild Admirals fans were creating to support their team. 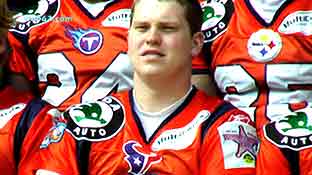 Kicker Chris Snyder from the Houston Texans had been a highly productive force for the Admirals by having scored two field goals from a 28 yd and 32 yd distance. But after the season he couldn't find work in the NFL. 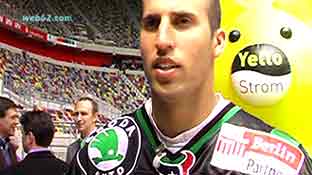 Houston Texans QB Dave Ragone had thrown three TD passes during the World Bowl which simply wasn't enough to bring it home for the Berlin Thunder on that day. 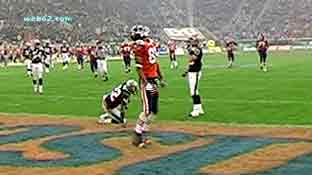 Receiver Ruvell Martin had started the amazing Admirals touchdown fiesta with the superb conversion of a fine 22 yd pass from quarterback Kurt Kittner.

Admirals TE Mike Gomez from the Buffalo Bills had scored the second TD after a 12 yd pass from Kurt Kittner. 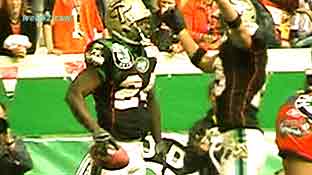 Running back John Flowers had looked ready for a solid career in the NFL, but in the end none of the teams had given him a chance after he had contributed 1 TD and 52 yards with 10 attempts.